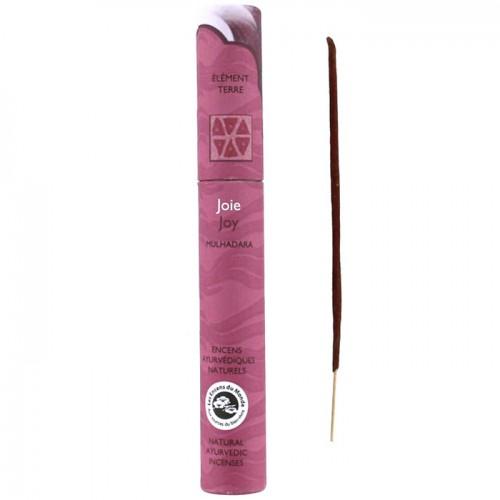 The composition of the range of Ayurvedic Indian incense follows the techniques of the ayurveda (traditional medicine) and intervenes on the 7 vital centers, the chakras.Joy incense sticks act on the Chakra Racine (Mulhadara).

, Patchouli and queen of night (Jasmin) form a clever blend that helps with tonicity, its woody and spicy scents represent the element Earth, which makes it rather optimistic and cheerful, its sticks lasting about twenty minutes at the The red and white sandal is used in Hindu rituals in the form of a paste and is applied to the statues of the gods And religious articles, and is also affixed by the priests on the forehead of the faithful as a sign of purification.

The plants that make up these Ayurvedic incense have an activity on the various vital centers (the chakras), as well as on the psyche.

This plant mixture is invigorating and is associated with the element Earth.

It has a particular resonance on the root chakra, Mulhadara.

This incense is made in India in the state of Karnataka according to the method called Dry masala bhattis".

A dry and sticky paste is made from sandalwood and hevea powder.

Extracts of plants and essential oils are added.

The incense sticks are rolled one by one by hand, with a graceful and coordinated movement of both hands.

16 other products in the same category: